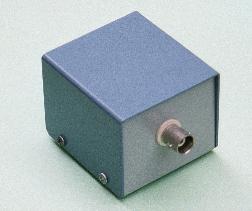 The "dummy load" is an indespensible accessory for any radio amateur. Using a dummy load, transmitter adjustments can be made "off-the-air" so that no unnecessary interference is generated on the ham bands. And dummy loads are an easy useful project that just about anyone with moderate soldering skills can build.

The one described here can be used for up to 35 watts for short transmissions, and up to 25 watts for longer periods. It presents a 50-ohm load (or something very close to it) from DC to well over 30 MHz. Because it is rated for low-power operation, it makes an ideal dummy load for the QRP operator.

Dummy loads dissipate energy by generating heat. Heat generated in a small space translates to temperature rise, and temperatures can be hot enough (under the right circumstances) to burn people and ignite adjacent materials. Because of the thermal mass of the dummy load and its enclosure, that heat can stay around for a long time. Always locate your dummy load in a safe place, where there is no chance that it will burn people or catch something on fire.

A dummy load is basicly a resistor, designed specifically to dissipate RF energy that would normally go to an antenna. Dummy loads are usually 50-ohms, although there is no reason why you can't build one at 75-ohms, or 300-ohms using the same techniques. Not just any resistor will do; a wire-wound resistor will have way too much inductance for use at HF frequencies (even the "non-inductive" kind). Metal-film, thick-film, carbon-composition, metal-oxide film and carbon-film resistors are generally good candiadtes for HF dummy loads. You can buy resistors specifically made for high power and RF, but they are very expensive. Or you can take the approach shown here, and use LOTS of commonly available resistors in parallel to form a single resistor functionally

Knowing this, I went a-hunting at my local electronics outlet. I went looking for 1 or 2-watt carbon resistors, which are usually dirt-cheap. I had a big selection to choose from, and I ended up picking up 36 each 1800-ohm 1-watt 5% carbon-film resistors, at 5-cents each (oh, wow... almost $2). Using our formula, 1800 / 36 = 50-ohms... perfect! When constructed, these resistors will dissipate 36 watts safely for a short period of time (say 10-30 seconds), but will need a long cooling-off period after that. If I limit the power to half of that (i.e., 17 watts or less), I can probably key-down for much longer periods (but read the "WARNING!", above). At QRP levels of 5-watts or less, I can leave this keyed continually, with plenty of margin.

While I was at the candy store, I picked up a UG-1094 panel-mounted BNC jack, and a small aluminum project box, 2 x 2 x 2-inches. WARNING! plastic is NOT suitable as a construction material for dummy loads, and may even be dangerous, should it melt or ignite! 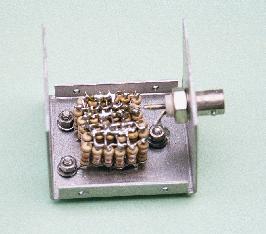 As you can see from the image above, I arranged six resistors in a row, routing the lead of the first to the second, and soldering it, and the second to the thrird, etc... on both ends. I ended up with 6 rows of 6 resistors, and soldered those in parallel, too. I left 3 leads on one side, which I formed into a "ring" terminal, which (in conjunction with 3 screws and 3 nuts) served to mount the resistor assembly to the inside of the enclosure. The other side gets wired to the center conductor of the BNC jack. Grabbing my trusty ohmmeter, I measured 49.7-ohms (plenty close-enough).

Don't be afraid to substitute different value resistors. Using the right number of EQUAL-VALUE resistors, you should be able to build a usable dummy load at any impedance from 25 ohms to 1000 ohms, and 5 watts to 100 watts (or more). Keep the peak voltages to less than 200 volts (Voltage = square-root of Power * Resistance). Use a shielded enclosure, possibly ventilated with holes to release heat. Be aware of heat dissipation (ever touch a 25-watt bulb?), and plan for it. The amount of power applied must never exceed the aggregate ratings of the resistors, and probably should be kept to something much less, depending on your enclosure and how well heat is released.